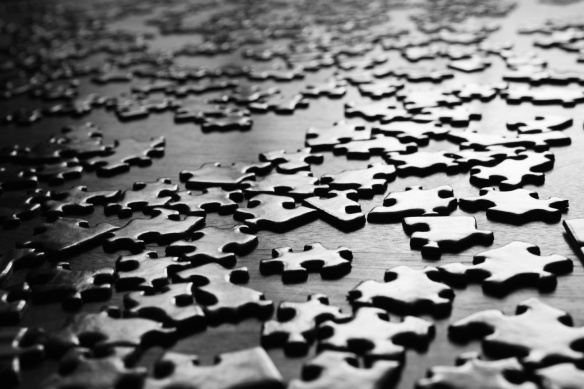 Over the years I have been called selfish, obstinate, sometimes even hateful and weird.  Not because of anything I’ve done, but because of what I don’t do; I don’t “fit in” with most people.  I see absolutely nothing wrong with this.  I am true to myself, and I am true to what I love.  Because at the end of the day, I have to live with myself, and I don’t have to live with anyone else.  So, the idea of altering anything about myself to try to “fit in” with someone else is not only phony, it’s disgraceful.  But a lot of people seem to do it.

Relationships have been dreadful for me,  for this very reason.  I have never had anything in common with anyone I’ve been in a relationship with.  The closest would probably be my girlfriend in high school, and what we had in common could be counted on one hand.  I mean, we liked to watch “Mystery Science Theater 3000” and we were both big Garfield marks, and we liked a few similar movies, but other than that, nothing.

My most recent “real” relationship, though.  Whew.  I was in a relationship for a few years with someone that, I can say with all honesty, had nothing in common with me other than the fact that we both ate food and breathed in oxygen.  You couldn’t have found two more mismatched people if you sat me down beside a cannibal from New Guinea.  This woman was many years older than me, which meant we were dealing with a generation gap, but it was in the wrong direction.  She wanted to be “hip,” so she told me once that “anything (movies, music, TV shows, etc.) older than two years old is garbage.”  I, meanwhile, hate most everything current and crave classic music, movies and shows.  So, the upshot of this is we spent every evening watching two different TV’s, or doing everything we did apart from each other.  Most times, not even in the same room at the same time.  It was beyond ridiculous, and stupid.  It was a complete waste of time for both of us.

In situations like those, you can choose to stay with this person who brings nothing positive into your life, and its basically like having a hanger-on because a lot of times they keep you from doing things you enjoy in life just because they don’t like it.  This has been a consistent problem for me.  And a lot of it is based on the fact that I am selfish and obstinate.  I am not changing for anyone.  Isn’t the fact that you would need to change who you are to fit someone else being completely dishonest to yourself?  Why do that?

Here are some examples of me being “obstinate” and “selfish:”

1.  I am a Chicago White Sox fan living in North Central West Virginia.  I am an island unto myself in that respect.  This area is Pittsburgh Pirates country, since I live around 90 miles from “The ‘Burgh.”  So, naturally, anyone I meet who is a sports fan will ask me “why are you a White Sox fan” and “why are you not a Pirates fan?”  Well, because that’s who I am.  I started following the White Sox in 1991.  I’ve invested nearly 27 years of my life into my team, not to mention thousands of dollars.  I’m not about to throw it all away just because there are no other White Sox fans in my area.  That’s not being true to me.

2.  I like classic movies and TV shows, and I haven’t watched anything really “current” since the mid-1990s.  Also, I never watched “Friends” or “ER” or “Seinfeld” or any of the shows that everyone else seems to have spent their lives watching.  I also don’t watch anything currently on TV, other than White Sox games on MLB.TV.  People look at me with disbelief and disdain when I mention “no, I don’t watch ‘Game Of Thrones’ or ‘I don’t watch ‘The Walking Dead.'”  This is amusing when I meet people who begin conversations with “oh, my God, did you see…” to which I can shut them down right there and say “no, I didn’t.”  Ask me who won the White Sox game.  That, I know.

3.  I’m my own man and don’t need anyone to “complete” me.  I can enjoy my own company, ad infinitum.  I’ve really never experienced this concept of being “lonely” because I have so many things that I enjoy doing, and that are things I do alone.  I don’t need anyone’s “help,” because nine times out of 10, it’s more of a hindrance than anything else.  I’m not saying I’m not appreciative of people wanting to help in certain situations, but most of the time I prefer to do things myself and do them in my way.

4.  I’m happiest when I am in solitude.  When I can think.  When people aren’t yelling at me or trying to make me do things I don’t want to do, or screwing up my schedule and ruining my day.  I rarely ever ask anyone for anything.  I wish that were the other way around sometimes.  And I’m not talking about friends asking friends for an occasional favor, I’m talking about a constant stream of noise and directives and demands.

Looking at it from an outside perspective, I think I would be hard to live with.  Of course, I have never been in love before so that could make a lot of difference in how I would feel about the situation.  If I loved someone, maybe I could make some adjustments.  But just from looking at me and where I stand now, I just like things the way they are, and I don’t need any interference.  And because I like things this way, I see no reason that I would need to change them, whatsoever.  As Sammy Davis, Jr. sang, “I gotta be me.”

Ultimately, I have no issue growing old alone and enjoying my own company.  In the event that I would ever meet someone who has more in common with me than those I have dealt with previously (and that wouldn’t take much), I might have an interest in looking in that direction.  I also have no trouble with social dating, a night out, dinner and a movie, with a girl who I may have absolutely nothing in common with because when the night is over, she can leave and my life continues, nothing has to change.

In closing, I just want to say that there are more important things in life than whether or not you are compatible with other people.  Be true to yourself first.  If you never have anything in common with anyone, that means that you are more unique than the people you are dealing with.  There’s nothing wrong with that.  There’s a world out there, just because you are an army of one doesn’t mean you can’t enjoy it.  I’ve had dinner alone, watched movies alone (in the theater and at home) and that’s just part of my every day life.  You should live it.  Enjoy it.  Because you will always have yourself to share it with.

1 thought on “Me First: Why I Like Being Incompatible With Everyone Else”