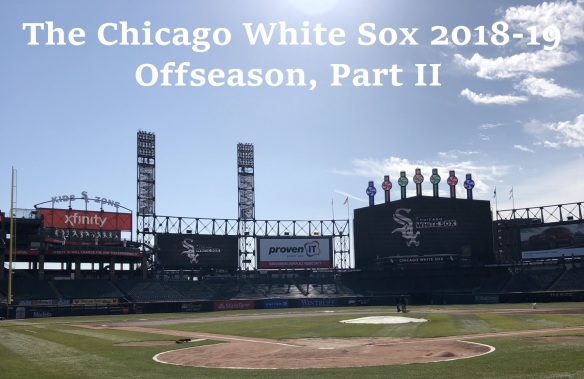 Let me preface this piece by saying this has to be one of the most boring offseasons in history. I can remember around 25 years ago when things would really pop at the Winter Meetings, days of trades and signings, surprise moves and lots to talk about. I spent more time yawning than talking about the Winter Meetings in 2018.

It’s January 2 as of this writing and the Chicago White Sox offseason moves are as follows:

– Traded for pitcher Manny Banuelos from the Los Angeles Dodgers.

– Non-tendered IF Matt Davidson and OF Avisail Garcia.

– Traded for pitcher Ivan Nova from the Pittsburgh Pirates.

– Traded for 1B Yonder Alonso from the Cleveland Indians.

– Signed catcher James McCann, who was non-tendered by the Detroit Tigers

That is the sum total of the White Sox offseason so far. Now, I know a lot of people legitimately believe the Sox are going to sign either Manny Machado or Bryce Harper, that they are going to put a ten-year, $350 million – $400 million offer on the table and one of the two of them will accept, and then we’re set at third base or right field for the next ten years. I have a multitude of issues with that on several levels.

First is the obvious, this team doesn’t spend that kind of money. Ever. After all, the White Sox could have had Babe Ruth but elected to lowball the Red Sox and he ended up with the New York Yankees, so this isn’t an organization known for liberal spending. And, as has been brought up numerous times in the media, the largest contract the team has ever handed out was six years and $68 million to Jose Abreu prior to the 2014 season.

Second, we have two guys here who have never won. Both have played on solid teams in the past, but neither has won a ring, and in fact in their combined 14 years at the MLB level, they have made one World Series appearance, Machado last season with the Los Angeles Dodgers. So they have not known a lot of success.

Yes, I know the most important thing to them is their wallet, but does anyone really believe that (a) the White Sox of all teams will have the largest contract offer, either overall or AAV, or (b) that the White Sox window of opportunity for winning will last any longer than, say, 2026? This is when several of the prospects will be hitting free agency, so there’s a pretty solid chance that in 2027 the team will begin to rebuild again.

More importantly, neither Harper or Machado is a pitcher, and the White Sox have a black hole in the bullpen and at least one opening in the starting rotation. If the season began today, the rotation would consist of Carlos Rodon, Ivan Nova, Reynaldo Lopez, Lucas Giolito and Dylan Covey. While Giolito and Covey will more than likely have ERA’s over 5.00 by the end of 2019, Rodon is a good bet to have at least one trip to the disabled list. That leaves two pitchers that we should be absolutely able to count on in the rotation. And this is assuming the White Sox don’t offer James Shields a minor league deal and an invitation to Spring Training, which I said months ago I expected without question.

The bullpen looks worse. While there may be a legitimate closer for the first time in a long time (and I don’t consider David Robinson a “great” closer, by any stretch) in Alex Colome, getting a lead to him may be a problem with that rotation and a bullpen that lacks arms, beyond a guaranteed-to-get-hurt Nate Jones and a solid Jace Fry.

The White Sox will play their yearly game of picking up scraps from the garbage dump and plugging them into the bullpen in the hopes one will pitch to some level of decency and he can be flipped to a contender at the trade deadline.

One of the main problems I see with this franchise is that someone in the front office, or maybe everyone, thinks that putting together an offer for Harper or Machado is somehow a “win.” Like somehow you get a consolation prize when Machado goes to the New York Yankees and Harper goes back to the Washington Nationals.

No one cares who finished second in these free agent chases. I direct your attention to 2016, when the White Sox were the “clear favorites” to sign OF Yoenis Cespedes as a free agent. Of course, he resigned with the New York Mets for $110 million over four years and the White Sox were blown out of the water. This time is no different.

As much fun as it may be to sit and hope that either Harper or Machado will decide that they’re willing to play for half what they think they’re worth and they’re willing to play on losing teams for five years out of a ten-year deal, assuming all the prospects the Sox have collected pan out and they can contend from 2022 to 2026, I prefer to take a more intelligent approach and wonder what happens when they DON’T sign with the White Sox, because there has to be a plan B on the table in Rick Hahn’s office.

Or Kenny Williams’ office, you know, whoever is running this team, for real.

Do you feel comfortable heading into 2019 with the rotation mentioned above? Do you not worry about the bullpen arms evaporating and going elsewhere before you have a chance to sign them, or do you just bring up fringe prospects from Charlotte to fill out the bullpen until you find an arm to plug in? An outfield of Leury Garcia, Adam Engel and Daniel Palka, with Nicky Delmonico filling in as needed? The only upgrades this team has made will make no difference once they start contending, as Nova is a huge upgrade over James Shields (I guarantee that Ivan Nova’s 2019 season will exceed James Shields’ 2018 season in every measurable category so long as he stays injury-free this season) and Yonder Alonso is a huge upgrade over Matt Davidson. But neither will be here in 2022.

And I still think Alonso was acquired as an enticement to Machado.

And then the press will begin (actually, have already begun) to tout the 2019 free agent class, and how much better it will be for the White Sox than Harper or Machado. The three names I see most often are Colorado Rockies third baseman Nolan Arenado, Houston Astros pitcher Gerrit Cole and our old buddy, Boston Red Sox pitcher Chris Sale.

Next offseason will be just like this one, as the White Sox are on the outside looking in as those three and many others sign (or resign) elsewhere. Hopefully, outfielder Eloy Jimenez and pitcher Dylan Cease will join the Sox at some point in 2019 and make a smooth transition to the big leagues and become solid contributors, which will help the lack of free agent signings and take some of the sting out of that situation.

The bottom line is this team isn’t very good, and even if everything breaks right, they’re not going to be good for a couple or three years, and once they are good, they’re only going to be good for about a five year window, before these youngsters hit salary arbitration and, eventually, free agency. That’s the problem with a rebuild and bringing in a large number of prospects, it’s guaranteed to fizzle out after five to seven years.

So if I were Machado or Harper (or Arenado or Cole or Sale) I would want to go to (or stay with) a team that has had consistent success over a long period of time. If we look at the White Sox from 2012 to, say, 2029, which would be the third year of a potential second rebuild, and we’ll say they’ll be a juggernaut from 2022 to 2026, that would leave them with 12 losing seasons out of 18. I wouldn’t call that sustained success.

I don’t think the White Sox will be looked at as a front runner in free agency until 2023, once the prospects are called up and they have had at least one season of legitimate, on-field success, along with replacing manager Rick Renteria, who is not the second coming of Tony La Russa no mater how you slice it. Renteria’s star was rising a decade ago, and he’s done nothing since to enhance it or show he’s at all capable.

As we’re now down to the final six weeks of the offseason before Spring Training, maybe the White Sox will bring Shields back on a minor league deal with a Spring Training invite and a $3 million MLB salary, or maybe a Francisco Liriano or a Marco Estrada on a one-year deal to hold a spot for Michael Kopech, and maybe a John Axford or a Brad Boxberger or a Brandon Maurer for the bullpen with hopes of flipping a formerly successful pitcher into a minor leaguer at the trading deadline. That’s about the best we can expect.

I honestly wonder if the Machado/Harper “chase” is just a way of laying off free agency until most of the big money players are off the table (like Adam Ottovino, who would be a great addition but I’m sure the three years and $30 million are more than the Sox want to pay for a 7th or 8th inning guy) and then the Sox can sign whatever is left over at bargain prices and blame their lack of spending on Harper and Machado.

Now, I’m not saying I want them to spend without reason, I don’t want to see Dallas Keuchel in Chicago under any circumstances. But there’s no reason the White Sox couldn’t have taken Yasiel Puig and Matt Kemp off the Dodgers hands instead of the Reds. Kemp could have filled in at DH this year (he’s a free agent after the season) and Puig could have been a fixture in right field for the next five years, or even through the entire contending process. And probably at 1/5 the price of signing Bryce Harper. Or pretending to try.

In closing, I’d like to say the White Sox can surprise me and make a really great move this offseason and next and build a team that can be competitive immediately, but as a fan of this sport for more than 30 years, I’ve seen enough to know how this movie ends.

Thank you for taking the time to read, and I’ll probably post a final piece about the offseason the second week of February, prior to teams reporting for Spring Training. We should have a much better picture of what we’re dealing with by that point, and I doubt it’s going to be a whole lot different than what we’re dealing with right now.

I hope I’m wrong. But I rarely am.